And Most of All

This evil mutt convinced her poor father that she had been attacked by Marley.  Okay, okay; Gavin insists that I admit that by the end of her little performance she had me convinced too.

She had a cut under her eye.  I suggested that she had opened the cut with a claw accidentally while rubbing her eyes.    This is a terrible habit she has developed, any time we see her do it we stop her.  She knows its wrong so she does it when no one can see her or when she is far enough away that she can have a good rub before she can be stopped.

Oh, dogs will do anything to please their owners!

Yeah unless by disobeying they can get something they want.

This is my issue with both dog training and positive reinforcement for children’s behaviour.  Granted it does seem to work on your bigger work breeds (dogs not kids) like German Shepherds, Rottweilers and Labradors, but little dogs like children can’t be relied on.  A child; or dog, from a deprived upbringing or an abusive one; sure, attention becomes their number 1 goal in life.  But; and this is where psychology falls down because most studies are based on remedialising aberrant behaviour, if the child or lap dog has affection lavished on them and is fully confident of their parents’ unconditional love, then the occasional temporary lapse in positive affirmations can be weighed against potential reward.  If I steal a cookie from Mummy she will be cross but I will have a cookie and in 5 minutes she will stop being cross.

Does this mean; I hear you ask, are dogs, and to a lesser extent small children, smarter than Psychologists?  The obvious answer is yes; yes of course they are, this is after all a pretty simple idea.  But I’d have to qualify that to most not all; I am sure a small number of Psychologists have actually worked this out; and a few others would have but there was this great party in the student hall and a hot engineer said they looked great in their new dress and…

Back to the case history:

Gavin reminded me that he & I had heard, but not witnessed, an altercation earlier.  The children had informed us that Marley and Cherise had had a really big fight.

So Daddy asked his Little Princess, ‘Did Marley do this to you?’

And the little diva trembled.  That’s right she feigned extreme fear, but only when Marley’s name was mentioned.  Every time she heard the word Marley she would shiver, move closer to her Daddy and lick him pathetically.  Test words did not cause any reaction.  I will admit this is how they; Gavin was on her side at the first quiver; as usual, finally convinced me.  I was sceptical but she reacted only to his name and she had never reacted like that to Marley’s name before.

At this point I would like to tell you a story, of Cherise when she was still a puppy.  But as it turned out I wrote over 400 words so instead you can look here:

So of course Daddy bundles Little Princess up, she was petted, consoled and generally made a tremendous fuss over.  While Charlie, Orion, Echo and I looked on in disgust and rolled our eyes at each other; well Charlie and I rolled our eyes, the cats did the feline version.

Little Princess Cherise was not going to play with that vicious Beast; Marley, again Daddy decided as his little angel scoffed down treats to make her feel better.  Again I have to admit; she had taken me in too!  I was scared that he might do her an injury.  I mean look at that jaw! 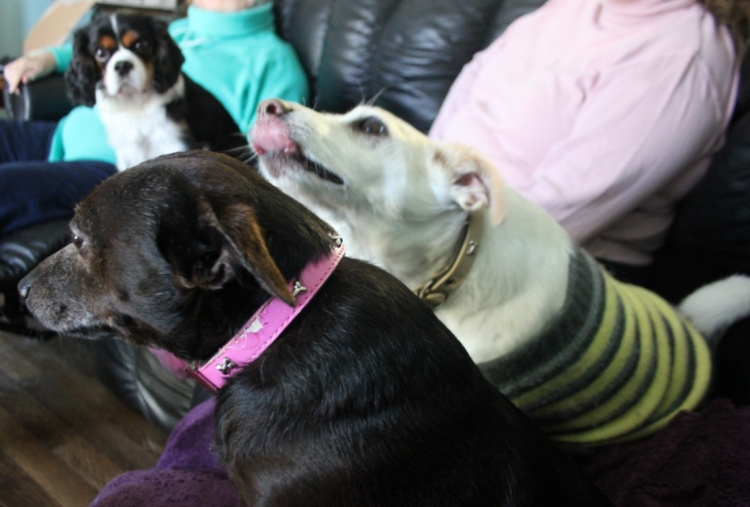 And he was a pound dog, he is tough.  I’ve only ever seen him backed down by Gavin and Chase.

To be continued…  Part 2