A few nights ago Echo tried to further her relationship with Charlie the soppy spaniel. 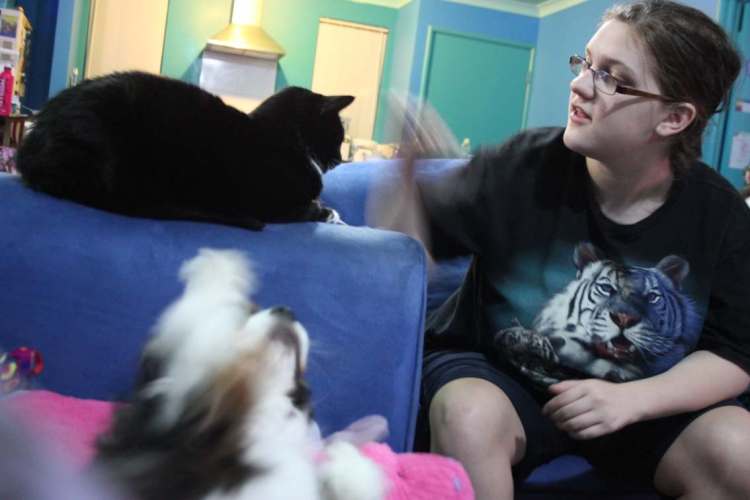 Unfortunately her method was a little… unusual.  She stared angrily at him and moved close to him; if (well, when) he pulled away, whined or acted in any way scared she walloped him.  I know it may sound like a straight forward behavioural management plan.  Do you think Echo was a psychologist in a previous life?  I mean carrot; cat kisses, stick – cat claw slap down. Along with a stare that made it clear she was not amused.  The look I got when I picked him up and cradled him; then she hit us both. 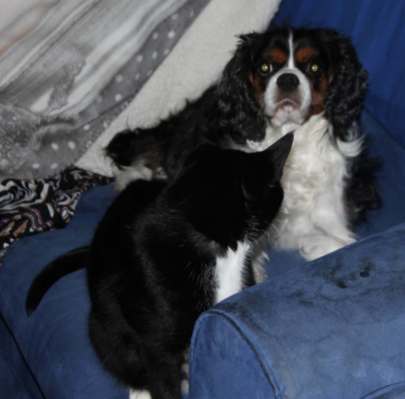 Somehow, believe it or not, this failed to endear her to the confused, terrified dog!

So she changed back to the previous method.  Gazing at him adoringly she showered him with affection.  Echo groomed the panicking dog, she rubbed against him, she deliberately fell on him and snuggled him with her whole body.  She purred her love for Charlie.  Licking clean his chest and face, lick/biting his ears & ears thoroughly.  Echo groomed Charlie to within an inch of his life.  While regularly stopping to push her head against his throat, head and back.  She generously ignored his thoughtlessness (males!) and helped him pat her by rubbing against his feet; each time stopping to look at him so he would notice how much she purred when he patted her.

Charlie moved past petrified to terror.  I could see him starting to bare his teeth and heard the rumblings of a snarl.  Echo was right in his ear the first time, so I quickly locked eyes with him and spoke soothingly.  Thank goodness it worked because Queen Echo does not tolerate open aggression, even though this lack of tolerance has usually resulted in a pasting by the other cats.

But think about it; Charlie is a Cavalier King Charles Spaniel.  He was bred to be a patient, affectionate lap pillow.  Baring their teeth hasn’t been done in generations.  But I couldn’t blame him.  I forgot to mention, although you probably guessed, she had him cornered.

And I know what you are thinking.  No, I did not stand by giggling, like his father.  I spoke soothingly to Charlie while stroking them both to keep tensions down; as I carefully untangled Echo’s feet so she wouldn’t claw poor Charlie as I pushed her off the couch.  Without any help from the callous hyena I married.

Not just once, mind you!  I have no idea how many times I pushed that cat off before she finally relented.  She stopped showering the poor pup with her terrifying affectionate overtures.  But she made sure she sat between us for about 10 minutes, just to prove it was her decision.

Echo is nothing if she is not determined!  Oh & violent, Echo is definitely violent!