While we were driving along the other night hunting for Christmas lights the weirdness of what we were doing struck me.

Now that our faulty modem has been replaced I am planning to resume my blogging but having accumulated over 6000 posts to read in my absence I won’t be looking at my backlog.

Anyway on with the current weird topic.

Christmas light hunting starts at about 8:00, if you go out any earlier it is still too light.  And our loony politicians want to introduce daylight savings time; shift our clocks back an hour so we get sunlight for an hour later each night, just to bring us in line with Sydney and Melbourne.  I’d say it’s their problem if they want to be stupid, but I lived in Victoria when they introduced it there and we hated it too.  The forced trial a few years ago almost bankrupted a few open air cinemas and other entertainments.  When the daytime temperature routinely gets to 42*C, 107.6*F few people aren’t desperately waiting for darkness to take the edge off.

So off we go at 8:00; the whole family pile into the car; dogs included but Gavin has meanly vetoed taking the other pets.  Even though Orion is very interested. 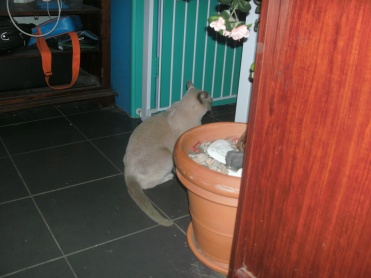 Lots of people in Perth take their dogs light hunting with them, of course a lot of them walk their dogs but our dogs; especially Charlie the Cavalier, prefer to drive.

We drive around the streets looking for houses that have decorated for Christmas; or Hanukkah etc. (yes, some do).  I have mentioned this before, but to avoid confusion; which is always best with people that have guns, we do not shoot the lights, we look at them.  I know, I know, I said hunt.  But as I have said before normal people in Australia are not allowed to have guns; and the exceptions are not crazy (sorry PC version mentally ill, or autistic) people but certain professions mainly in law enforcement (only on the police side, criminals are not a legal exception).  So we can’t shoot the lights, no matter how much we want to.  We just look at them and say “Ah” and “Oh” and similar expressions of admiration.

I don’t know whether this is an autistic thing or not;  an abnormally strong interest in fire, torches and spinning things is an extremely common autistic symptom.  We love light hunting; I mean we love it, fireworks and light hunting are just so… what’s the opposite of terrifying?

Two nights ago the ‘Doctor’ didn’t come in before we went out and the car overheated we had to walk around for half an hour before we could drive home again.  Gavin & the kids had made fun of me two nights before that because I bought battery operated fans with water misters and took them with us.  So that night I only brought one; the dogs & I enjoyed the cool breeze from my little fan, it may not have been much but it was something.