Cheerier news today!  For a few months now we (my support worker &I) have been working on my fear of going outside.  I’ve been to a dog park twice but mainly I have restarted gardening.

When we first moved here a couple of years ago I managed to garden a little.  The yards were paved and landscaped and I would go out at dusk and plant things, I even started going into the garden when I was alone and feeling edgy.  This after a little over 20 years of being so scared of our previous yard that I stacked boxes in front of curtained windows to keep sight of the outdoors away.

Than the house next door was built, a stark white roof blazed relentlessly at me, every trip into our yard was a sensory nightmare.  Plus I could here them and feel them there, grumpy, fighting.  I retreated back into the house and drew the blinds and curtains.

But now I’m going out and gardening again with my support worker.  I decided to prune back my lemon grass which was covering 5 of its neighbours and was taller than me.  It took 5 sessions & we were both slashed but we got it down.  The poor thing was overly dense and had a pocket of rotting leaves and water that was killing it.  All better now. 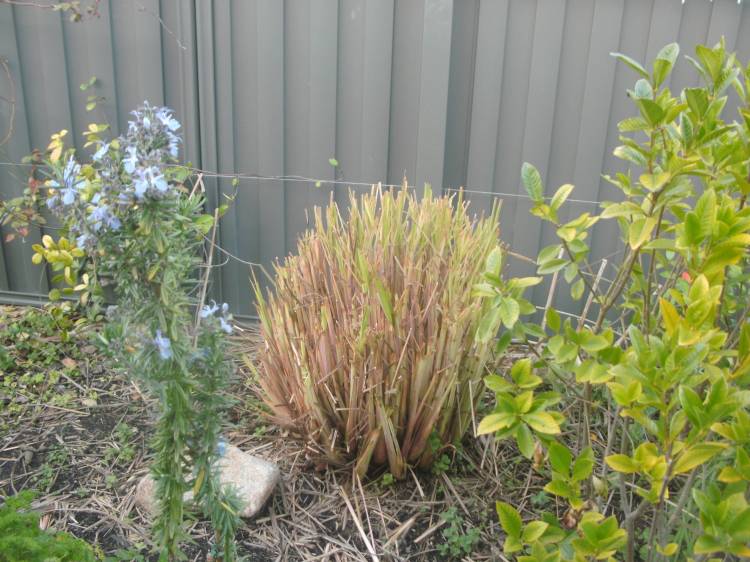 On Monday my support worker couldn’t come so I asked Gavin if he would like to take me to the Masters (Hardware/Gardening etc) clearance sale he wanted to go to.  We went and I got a kneeling support thingy, I damaged my knees 8 years ago and they are still painful.  I decided to get some plants Mum, the support worker & I had talked about to fill in some gaps.  Found them, bought them, convinced Gavin to accompany me into the garden to plant them.

On the way home we bought some groceries, while Gavin did the proper shopping like he always does, I got some fresh produce for a recipe I was going to make with Faye, a treat for the kids and I and some drinks to sample.  My tastes changed again recently and I could only drink soft drink (coke and lemonade mainly), flavoured milk and tea and coffee.  The other drinks I had been drinking made me gag and gave me nausea.  I selected 2 juices and some cordial, give me a break I’ve been living on Coca Cola for 3 months.

So despite my intentions when my support worker arrived on Thursday I had only tasted 1 of the juices and I had done nothing.  So we planted the 3 different strawberry plants and the two hybrids; pineapple/strawberry & raspberry/strawberry I can’t wait to see them.  And I was still alive so we planted the Grevillia with my late step father’s name, another Grevillia and a pink Kangaroo Paw.   See below:

We went in and made up one of the cordials, success I can tolerate both juices and one of the cordials (one still to try).  And did the stupid book club work, which had its own reward because it was followed by a survey as to how well my sales rep looked after me.  I was a real b*#%h; I told the truth.

Time for her to go but because of Monday; and the fact they are worried about us especially now Mum has gone to Victoria for the funeral, she could come back today.  The only person more happy than me was Charlie; he loves her so.  Charlie learnt as a pup to do a ‘people kiss’ he lifts his muzzle to your lips holds for a while and then makes a sneezy sound, I realised it was his attempt at ‘myah’ the noise people sometimes make at the end of a kiss.  He also makes a growly mmm sound when he’s hugged or when he puts his front legs around someone to give them a hug.  So to stop my support worker F. leaving he started making the kiss sounds at her standing still and tossing his head straight after; he was blowing her kisses, but it only bought him a big cuddle and a few extra minutes.

Then big news I took 2 family members on 2 separate tours of our work; outside voluntarily.  Then I got this idea for a blog and quickly before I could over think it I went outside on my own and took photos.  Writing this down makes it seem ridiculous, but these were really big things for me.  More photos of our gardens and rabbit/rat larder:

So garden all done (some of the garden at least) and house cleaned last week for the party (some of the house at least) and time to face another fear.  First going into my kitchen, then cutting with a big knife pumpkin very scary then stirring a pot while it was on the heat.  I had decided not to wear gloves as F. said she would cut the onions, so I had a reaction to the pumpkin and my skin started to slough off, F. asked if we could put something on it and I remembered we had aloe vera in the garden; perfect for an allergic reaction.  So we dashed out to the garden while lunch was simmering and I showed F. how to use aloe straight from the plant.  I offered to get a cutting growing for her & then we looked around we have 4 pots overfull with it; I haven’t used it since the kids got sunburnt last summer.

Back to the kitchen’ quick wash of hands and then unexpectedly the scariest bit of all.  F. held the pot while I used a hand blender; her face that close to a blade and hot liquid and me holding the blender.  We survived and we had a whole pot of; yes I’ve been keeping it deliberately as a surprise,  PUMPKIN Soup.  I love pumpkin soup but restaurants and shop soup is always filled with pepper or worse.  My pumpkin soup; recipe found by F. and made more dull by me, had only butternut pumpkin, creamed corn, onion, chicken stock, butter & cream.  It was so fabulous, one of my favourites.  Then we talked to Alex’s support worker because Alex had left for a nap; F. said it was because I was avoiding making phone calls but after she chased her out (Lol) I made the 2 worst and I even emailed someone after she left.

And this was after a horrible trip to take my mother to the airport where I was repeatedly pummeled by 4 horrid children just for making sensible observations and suggestions.  For example if the moving walkway I was on was for the old & decrepit Grandma would have been on it & Grandma would need to flap her arms if she wanted to fly.  At least I didn’t walk behind my mother saying “You want to go to the gift shop” repeatedly in a deep voice and then pretend not to have said anything and suggesting that it was not in fact me but her conscious.  That was Tasha, me not precious Grandma.

Productive 2 days, Blogging Workshop tomorrow; my in-laws are taking me because the kids have Drama & with Mum gone we are down to one driver.  I could have got a taxi or not gone but they are being really supportive.  If I can keep moving for the next few weeks this may be my first crisis that doesn’t result in a collapse.  Yah!