Like out on the savannah rocks well after the midday heat,

Two lions fight, but slowly, not to kill, just to beat.

Atop the cat tree lounged Smokie; the elder, but still prime.

On the second tier Orion, the kitten thought this was his time! 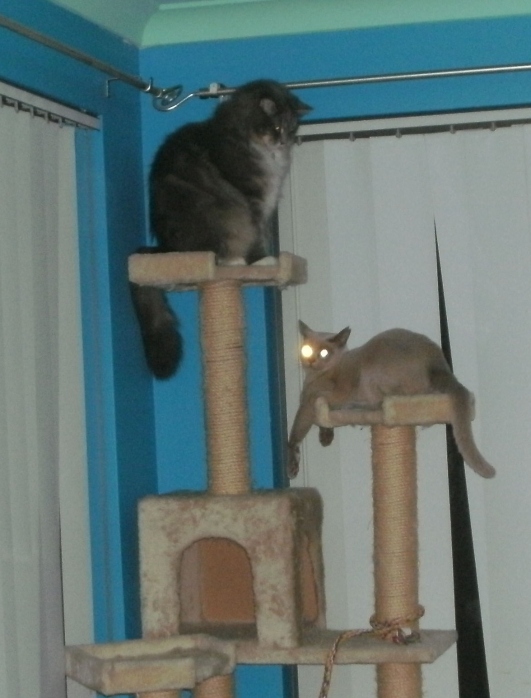 Orion struck the first blow, he also drove the second!

Smokie moved languorously; weight was on his side he reckoned.

He moved into position, paw firmly on the kitten’s head,

He was sick of that young upstart trying to roust him from his bed!

Orion squirmed and wiggled, he needed to get free!

He always sat right on top, it was his favourite tree!

The third time Orion wriggled out he was shaking like a leaf.

Smokie firmly held his brother and grazed him with his teeth!

Orion was still tiny and yes he still was young,

But he knew no fear and wouldn’t let Smokie hold the highest rung!

Smokie hadn’t moved much, he was a mountain of a cat.

If he couldn’t win with experience then he would win with fat!

Orion batted frantically with all his youthful vigour!

Then retired to the doggies’ basket; plotting to get bigger.

Smokie was undisputed king and all others left to weep!

The king left his chilly platform seeking softness for his head,

His father’s sleeping body made a warm and comfy bed.

4 thoughts on “Pride of the Holts (A Battle Epic)”